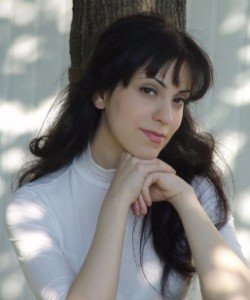 Victoria B. is one of the foremost young performers of her generation. With an unparalleled versatility, her varied theatrical and musical experiences have enabled her to thrive. Victorias career began with an unlikely twist when she was just 11 years old. Quite by accident, she found herself auditioning for a London Radio Program lining up with hundreds of other young girls. She sang London Bridge and to everyones amazement the casting director sent the other girls home and chose Victoria. This led to recurring appearances with the B.B.C and Thames Television and in feature films playing alongside the likes of Anton Rodgers, Ron Moody and Victorias first Royal Premiere at Londons Leicester Square Cinemas.

During her course of study at the Juilliard School Victorias early forays upon the NY public have included engagements at Lincoln Center, Carnegie Hall, Alice Tully Hall, Merkin Concert Hall and Bruno Walter Auditorium. Last year she performed for the Princess Grace Foundation and was given a royal invitation to sing at the Palace in Monaco and for Queen Noor in Jordan. Most recently, Victorias singing was featured on the French TF1 program Sept a HuitHaving straddled both the classical music world and the realm of more popular music.

Victoria loves to infuse the operatic arias that have been greeted with critical acclaim, with more of a pop sensibility…thus fusing the gap between classical and mainstream music.