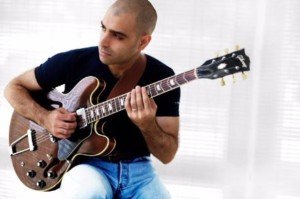 His single As Simple As That” is climbing the charts steadily along with top smooth jazz artist: Tower of Power and Paul Jackson Jr.Years of discipline and exploration with the guitar have led him to many genres of music and international acclaim. His effortless playing and passionate performances have wooed audiences around the globe from Maplewoodstock Festival in NJ and Aviv Festival in Miami, to his impressive invitation to play for former President of Israel Ezer Weitzman.

He recently, with the help of ASL Media and Promotion, has recorded radio spots to be introduced including the UK smooth jazz circuit JazzNet 247 and WJAB 90.0 FM in Alabama USA. Udi has traveled extensively with his guitar to try his hand in various genres from hard rock to blues and jazz. He studied with greats such as Steve Paskof, (Berklee College of Music Alumni) who has played with greats such as Marcus Miller and John Scofield. After performing in different regions around the world from Eastern Europe to Canada’s borders from coast to coast in America, he has settled and found his home in NYC. He plays regularly at The Bitter End, The Groove NY, Cutting Room and other high-end venues around the city.

Udi has left his signature licks on many artist CD’s such as Mano Reza- The Acid Jazz Project vol 1, James Reeno- Reeno 360 Degrees, Devlin Miles- Autumn’s Fires, David Easton- Long Road Home and considered to be on a high demand session player of Spazzoid Records and many more.