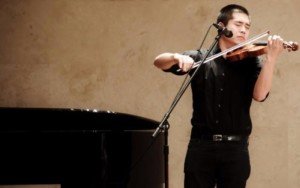 Mr. Cho commitment to education and leadership is second to none. He has been engaged as violin/conducing faculty with institutions such as New York School of Music and Art, Grace Music School. He is currently the Orchestral Director of Amadeo Symphony Orchestra and Manhattan Music Festival. He has worked with New York Classical Symphony Orchestra as the assistant conductor for four seasons and with the Greenwich Symphony Orchestra this year.

Tim began his career in San Jose, CA with several award-winning performances with San Jose Young Artist Concerto Competition, California Young Artist Concerto Competition. Tim has also toured with San Jose Youth Symphony as the concertmaster in various countries in Eastern Europe and South America where the orchestra was awarded with the Ambassador Award for Cultural Diplomacy by the U.S. Ambassador, the Hon. April H. Foley. He also engaged in annual benefit concerts funding Red Cross as the lead violinist.[/fusion_builder_column][/fusion_builder_row][/fusion_builder_container]