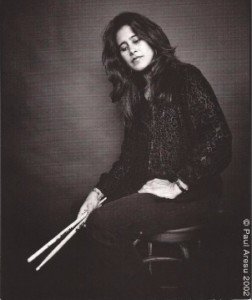 Sylvia C. is an active young drummer on the New York jazz scene who is contributing outstanding performances in a variety of situations. Recently, she has been performing extensively with trumpet legend Clark Terry as part of his quintet. This group performs annually at the Village Vanguard and the Blue Note in New York City, on the Royal Caribbean and the S.S. Norway jazz cruises as well as many clubs, concerts and jazz festivals. In addition to working with Clark Terry, Ms. Sylvia has performed with artists such as trombonist Al Grey, saxophonists Red Halloway, Jimmy Heath and Frank Wess, to name a few. Other achievements include several tours of Europe and the United States with saxophonist Joe Henderson. Since 1987, this quartet performed at the Taxi International Jazz Festival in Milano, Italy, the Brecon Jazz Festival in Wales, the Viersen Jazz Festival and the Burghausen Jazz Festival in Germany, as well as many concerts in Norway, Denmark, Sweden, Austria, Belgium, England, Switzerland and France. In a trio setting, she performed with Joe Henderson and Charlie Haden in 1989 and also with Joe Henderson and George Mraz in 1994.

Most recently, she was a clinician for the Sisters in Jazz Program at the 2001 IAJE (International Association of Jazz Educators) in New York and the Jazz for Teens Program at the New Jersey Performing Arts Center. She has taught and performed with the Clark Terry Quintet and the Eddie Henderson Quartet at various colleges and universities in the United States and Europe. She has been a staff member at the Stanford Jazz Workshop in Stanford, California since 1985. She was also Artist-In Residence at the Clark Terry Institute of Jazz at Westmar University in Iowa. In 2005, Guest Director for Sisters in Jazz Program at the Kennedy Center for the Performing Arts in Washington, D.C.