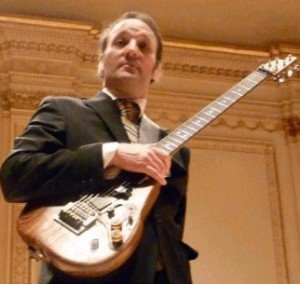 Sten was introduced to the international jazz scene in the mid ’90s, alongside many of the new jazz generation’s most prolific players, as an original member of Guillermo Klein’s pioneering large New York City ensemble. Sten H. has also appeared on noted recordings for Italian, British, Japanese, Swedish and American labels and with six official releases as a leader / co-leader.  Since 1999, Sten has received numerous grants and awards for original projects and recordings, and he has been recognized by leading press as one of few guitarists worldwide to create and perform, with self-invented techniques for the standard 6-string, new original music beyond the equal tempered 12-tone system. Current work focuses on modern traditional jazz and original compositions based on standard jazz songs and forms, along with work as a sideman and bass guitarist on the modern electronic music scene. Appearances at some of the world’s most prestigious concert venues include Carnegie Hall’s Isaac Stern Auditorium and concert halls and festivals in Europe and South America.

Since 2006, Sten has operated his own Manhattan based educational facility-NYC Guitar Studio and is also a faculty member of New York Jazz Academy.  Mr. H. is a veteran educator and former faculty member of one of the world’s oldest conservatories, The Royal College of Music in Stockholm. He has served as a lecturer at leading institutions in Argentina, Sweden and the U.S. and holds a Master of Music Degree with honors from the world’s first, as well as leading program for Jazz education, New England Conservatory and a Bachelor of Music Degree with honors from Berklee College of Music