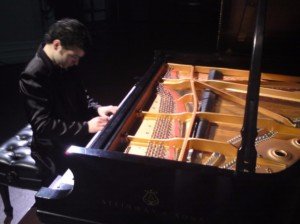 Philipp P. was born in Baranovichi, Belarus and began piano studies at the age of six.  In 1996 he entered the National School of Arts Veselin Stoyanov in Rousse, Bulgaria where he studied,  solfege, theory,  harmony,  and piano with Veselinka Ivanova and Daniela Kjurkchieva.  In Bulgaria, he competed in many festivals and competition winning several awards and distinctions including three 1st prizes (two for chamber music) at the International Music Festival:  Hope, Talents and Masters (1999, 2002). He also took top prizes at the International Competition for Piano Six Hands at Marktoberdorf, Germany (2002) and the Alexander Scriabin National Piano Competition,  Sofia,  Bulgaria (2003). In 2004 Philip was discovered by Tamara Poddubnaya and brought to the U.S. to study with her at the Long Island Conservatory.  Since then Philip has maintained an active performance and competition schedule and has won 1st prizes at the 2004 LISMA International Music Competition , 2005 Morgan Park Summer Music Festival,  New York and the 2011 Nelly Berman School of Music Competition, Philadelphia. In 2008, Mr. Philipp finally went back to his home country Russia and performed with Saint Petersburg Philharmonic Orchestra as a soloist in Saint Petersburg Grand Hall. Currently Mr.Philipp is a teacher and a piano faculty member of the Long Island Conservatory.