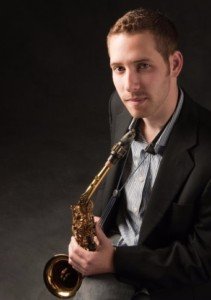 In the music he performs and the bands he leads, saxophonist Owen B. demonstrates versatility in a variety of musical contexts. With training in jazz and classical idioms on both saxophone and clarinet, he has performed in venues such as Avery Fischer Hall, the Chicago Jazz Festival, the Monterey Jazz Festival, the North Sea Jazz Festival (Rotterdam), the Umbria Jazz Festival (Italy), Théatre du Châtelet (Paris), and the Times-Union Center (Jacksonville, FL). He has had the opportunity to perform with celebrated artists such as John Faddis, Wycliff Gordon, Terence Blanchard, Byron Stripling, Maceo Parker, Christian McBride, and many others.In 2011, Owen toured the East Coast and Midwest with the Fatum Brothers Jazz Orchestra, performing at venues such as the Jazz Showcase, the Blue Note, and the Chicago Jazz Festival. After his travels with the FBJO, he spent a semester in Paris, France studying at the internationally renowned Conservatoire National Supérieur de Musique de Paris. He most recently performed with Eastman’s Chamber Jazz Orchestra at the Umbria Jazz Festival, performing recently uncovered music by jazz legend Gil Evans.

Owen holds a Bachelor’s degree in Jazz Performance from the Eastman School of Music, and is currently pursuing his Master’s at Manhattan School of Music in New York City. With his own musical projects as well as with many of those of his peers, Owen is an active performer, playing with a variety of ensembles throughout the Northeast. He is a bandleader, performer, and arranger, and an ardent advocate for furthering the state of jazz and jazz education.