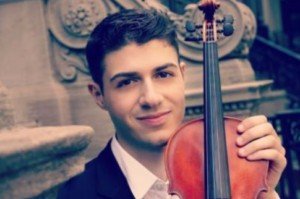 Violinist Matt Aprea earned his Bachelor of Music in Violin Performance and Music Education from the Eastman School of Music in Rochester, New York, where he also received an Arts Leadership Certificate, and graduated on the Dean’s List.

A native New Yorker, Matt has performed at Carnegie Hall with his piano trio, as well as with the New York Youth Symphony. Also a soloist, Matt most recently performed at the Abbey Theater in Orlando, Florida with jazz vocalist Angela DeNiro, and made an international appearance at “Les Nuits du Jazz” festival in Nantes, France. This past summer, Matt was awarded a fellowship to perform in the National Repertory Orchestra in Breckenridge, Colorado.

A passionate music educator, Matt received his New York State Teaching Certification, and has been teaching violin, viola, and piano for the past seven years. Matt also held a violin teaching assistant position at the USDAN Center for the Creative and Performing Arts on Long Island, New York.