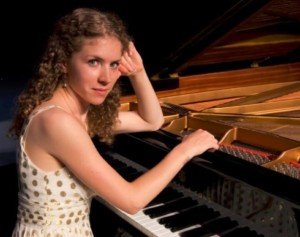 American pianist Manon H. has long been earning praise and recognition for her performances of classical and modern music. In Musical America, Christian Carey wrote: “Manon H. did an admirable job creating legato lyricism in a solo line that resides amidst a tremendously active accompaniment. Her sensitive dynamic shadings and subtle use of rubato demonstrated an artist possessing a great deal of promise.” Manon has performed in some of classical music’s best known venues, including Weill Recital Hall at Carnegie Hall and the Salle Cortot at the École Normale de Musique in Paris. She has also recently appeared at Symphony Space, the Society for Ethical Culture, the Richard B. Fisher Center for the Performing Arts at Bard College, the Fenway Center at Northeastern University, and The Jerome L. Greene Performance Space, home to radio station WNYC.

Having a strong interest in music of the twentieth and twenty-first centuries, Manon has premiered works by a number of living composers, both established and emerging. Most notably, she gave the U.S. premiere of Arvo Pärt’s “Pari Intervallo”, and in April 2011 performed in the premiere of Mohammed Fairouz’s opera, Sumeida’s Song. In the spring of 2010, upon the composer’s recommendation, she was invited to perform Joan Tower’s piano concerto with the Bard College Orchestra. Manon was named winner of the 2008 Young Artists’ Competition in conjunction with contemporary piano festival Keys to the Future, and she has appeared several times as a guest artist with New York-based ensembles Lunatics at Large and the Mimesis Ensemble. She has also performed alongside musicians from modern, non-classical genres: She was chosen as the Bronx winner in radio WNYC’s first city-wide “Battle of the Boroughs” competition, in which she competed against jazz, rock, gospel, and hip-hop artists.

Manon is a graduate of Mannes College of Music (M.M. 2009), where she was a student of Jerome Rose, Bard College (B.A. 2006), and Simon’s Rock College of Bard (A.A. 2003). She was the recipient of many awards at Bard, including the Margaret Creal Shaefer Memorial Prize in music, the Reader’s Digest Foundation Scholarship, and the Dr. Richard M. Siegel Memorial Prize in music. She was also a two-time winner of the Bard College Concerto Competition, and as a result played with the Bard College Orchestra, conducted by James Bagwell and the American Symphony Orchestra, conducted by Leon Botstein.

With a pedagogical lineage stretching back to Franz Liszt, Manon is a former student of German Diez, a student of renowned Chilean pianist Claudio Arrau, who was in turn a student of Franz Liszt’s pupil, Martin Krause. She has performed in master classes presented by Leslie Howard, Richard Goode, Robert McDonald, Jonathan Biss, Alexander Kobrin, Roy Howat, and Solomon Mikowsky, among others.

A native of New York’s beautiful Hudson River Valley, Manon currently lives and works as a teacher and freelance pianist in New York City. She on the piano faculty of Greenwich House Music School and is a member of the executive board of the PianoTeachers’ Congress of New York. She is also the administrative director of the Mannes Beethoven Institute.