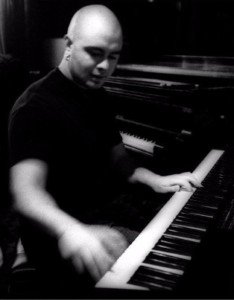 As a pianist, accordionist, and composer, Lars P. is an experienced performer and composer in many different styles of music. Since beginning piano at the age of five, Lars pursued his musical interests down the paths of classical, jazz, rock, and funk, eventually leading him to the Cincinnati College-Conservatory of Music. After completing his degree, he moved to New York City where he now resides. Lars’ most recent album releases include the Grammy Nominated Healthy Food For Thought (2010), Reverie (2008), and Sacrifice (2010)with the talented singer-songwriter Jann Klose. Throwback (2010) withfunk legend Milo Z, 11:11 (2010) with contemporary jazz ensemble 11:11, and Music in Words (2008)with his own jazz ensemble, the Lars P. Trio.

Lars has been a member of the Dayton Jazz Orchestra, the Afro-Rican Ensemble, and the Cincinnati Contemporary Jazz Orchestra. He made his orchestral debut as an accordion soloist with the Richmond Symphony Orchestra and has played accordion in jazz bands, rock bands, chamber ensembles, and theatre productions. Lars has played keyboards with the Cincinnati jazz-fusion band Cat City, who released the album, In and Out in 2005. He had five originals on the double-disc release, which Cincinnati’s City Beat described as lay[fusion_builder_container hundred_percent=”yes” overflow=”visible”][fusion_builder_row][fusion_builder_column type=”1_1″ background_position=”left top” background_color=”” border_size=”” border_color=”” border_style=”solid” spacing=”yes” background_image=”” background_repeat=”no-repeat” padding=”” margin_top=”0px” margin_bottom=”0px” class=”” id=”” animation_type=”” animation_speed=”0.3″ animation_direction=”left” hide_on_mobile=”no” center_content=”no” min_height=”none”][ing] the groundwork for the best playing and arranging.