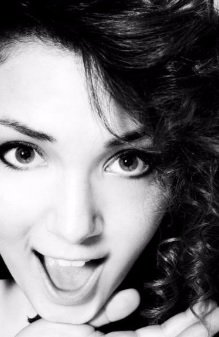 Kristen U. is a true dramatic contralto. With her range spanning from a D below middle C up to an the second F above middle C there was very little in life that Kristen was unable to sing.

In her younger years Kristen attended Potsdam University as a soprano for pre-college camp under the direction of Scott Levine. It was here where Kristen learned the fundamentals of how to build a strong but beautiful voice.

During High School Kristen studied choral, jazz and music theory under the direction of both Brian Reich and Rose Champion. Here Kristen was fortunate to attend master classes with contemporary jazz vocalist Jane Monheit and NYU professor Ira Shankman. During her High School career Kristen went on to land leading roles in a number of different musicals including favorites, Catherine in Pippin, Lilly in The Secret Garden, and Mina in The Legend of Count Dracula.

Outside of school, Kristen was awarded the honor of performing at such functions as The Long Island Sports Hall of Fame, Michel P. Murphy’s Memorial in 2007, and with the Bella Voci Women’s Choir, where all the benefits were donated to the American Cancer Society.

Kristen then went on to study at Long Island University, C.W. Post Campus for Music Education with a concentration in vocal studies under the direction of Ruth Golden. While at Post, Kristen also studied piano with Eugene Fegan and music theory with Richie Iacona. Under the direction of Dr. Jennifer Scott-Miceli and Mark Shapiro, Kristen attended master classes with well-known jazz musician James Moody and Grammy Award winning group Chanticleer. During her college career, Kristen was also fortunate to perform with the Teatro Grattacielo Opera Company in the North American Premiere of Pietro Mascagni’s Il Piccolo Marat at Avery Fisher Hall, Lincoln Center.

Today, Kristen teaches vocal/ piano/ music theory lessons out of her studio in Smithtown. She believes learning music should be fun and exciting! Kristen also teaches a well-known mommy and me program called MoonSoup, based out of NYC and Bridgehampton. Kristen currently is the lead female vocalist in the Long Island based band Jupiter Fell. She takes a lot of pride in being a singer/ songwriter for her band and believes those years of hard work and practice to get where she is today.