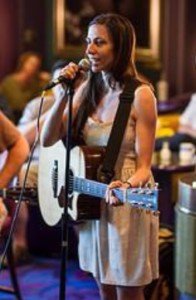 Kira Velella has been singing since she was a young child. She began formally studying voice when she was 14 with vocal teacher, Laurie Herzlin, and went on to become a thespian at Oceanside HS, performing regularly in every theatre production until graduating in 2002.

Kira also sang with a metal band on the island called Tenebrae, playing locally and nationally at music festivals. This was her first taste of singing for an audience outside of theatre, and she knew she just had to have more. After a year, she left Tenebrae to focus on her own musical pursuits.

In 2002 she began her studies at SUNY Purchase College, where she studied jazz and pop vocal performance with renowned jazz singer, Jo Lawry. She graduated with a Bachelor’s Degree in Music Composition in 2006.

Since graduating, Kira has been writing and performing her original indie folk compositions, frequently touring the south and northeast. Kira also has over 13 years of experience working with young children in musical and non-musical settings, and very much enjoys bringing her knowledge of and passion for music together with her love for kids!