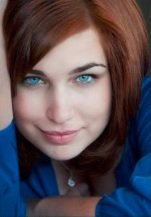 Kimberly F. has recently graduated with her B.S. in Music from Hofstra University and is now pursuing a professional career in opera performance.  She has most recently been hired by the Delaware Valley Opera to sing Hansel in their special Christmas production of Humperdinck’s Hansel and Gretel.  She has also sung with Divaria Productions in Manhattan and is scheduled to sing Hansel again in the spring with the New York Opera Studio.

Ms. F. is a recipient of many awards for both cello and voice.  She was an active member of the Symphony Orchestra, String Orchestra, the Dramit String Quartet, Chorale, and the select chamber vocal ensemble on campus.  As a member of the Honors College, she graduated with High Departmental Honors.

An active member of the Hofstra Opera Theater since her freshman year, she has appeared as Donna Elvira in the fully-staged production of Don Giovanni under the direction of Isabel Milenski, and Prince Orlofsky in Die Fledermaus.  She has also sung numerous roles in the scenes program, such as Charlotte (Werther), Ruggerio (Alcina), Carmen (Carmen), and Sesto (La Clemenza di Tito).Outside of Hofstra, Ms. Feltkamp studied with the Metropolitan Opera’s Nico Castel at his NYOS Summer Intensive program and in Salzburg at the Summer Academy Mozarteum with soprano Edda Moser.  This summer, she has been accepted into the selective Westchester Summer Vocal Institute where she will study with coaches from opera companies all over the United States.