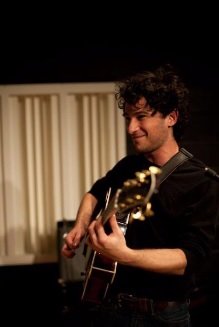 Joe’s dedication to the world of the guitar and its large repertoire has led him to find his own unique voice.  He is destined to continue making new and fresh musical statements.”  – Gene Bertoncini

Joe E., is a unique guitar player with a highly individualized voice on the guitar that draws from as many styles as it defies.  He is constantly searching for new techniques and ways of playing on his road to mastery.  A graduate of William Paterson’s esteemed jazz program, he has had the opportunity to study with master jazz and classical guitarist Gene Bertoncini, in addition to other top performers such as Mulgrew Miller, Vincent Herring, Bill Goodwin, and Steve LaSpina.  He has been playing and studying music since the age of 4, and has played piano and guitar in a vast range of situations, spanning from big band concerts, to premiering new classical works, to touring with a soul band.  He composes and produces for a living in addition to performing, writing works for live bands, theater, film, and commercials.  It is his passion and his charge to share his experience with any ear that will listen so that he may make music a bigger part of people’s lives.