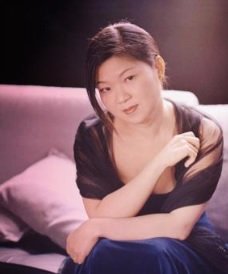 “… A sizable sound… (Washington Post), soprano Jamie ku thrills audiences across the Eastern seaboard. A favorite with symphonies, concert associations and opera companies for her interpretation of works such as Susanna in Le Nozze di Figaro, Zerlina in Don Giovanni, Despina in Cosi fun Tutti, Pamina in Die Zauberflöte, Nanneta in Falstaff, and Michaela in Carmen. Dr. Ku brings a sweet tone and compelling stage presence to her lyric coloratura roles.  Dr. Ku received her undergraduate degree from Tung-Hai University in Taiwan, her Master of Music and Graduate Performance diploma degree from Peabody Conservatory of Music of John Hopkins University and her Doctor of Music from the Benjamin T. Rome School of Music of Catholic University of America.  In addition to given solo recitals and performing with orchestras, Dr. Ku also enjoys working in small ensembles, and in 2006 she founded the Agape Trio, which specializes in Baroque and church music.

Dr Ku is a professional performer and educator.  For the past thirteen years, she has enjoyed sharing her experiences and skills with the younger generation.  In return, Dr. Ku has been appreciated and honored by her students in so many different ways.  In 2003, she was recognized by Who’s Who Among America’s Teachers association, and in 2008, she received the Teaching Excellence Award from St. John’s University.   In April 2008, Dr. Ku was invited by Taipei Municipal University of Education and Tang Hai University to perform and conduct master classes. In April 2010, Dr. Ku has certified as NYSSMA voice adjudicator and in May was hired as the vocal coach/ director by the St. George Theatre Group in Bellerose, New York, for the King and I musical production. This summer, she is the music director for the West Side Story musical production.

As an active church musician, Dr. Ku has been the music director of the Vineyard Chinese Christian Church of Flushing between years of 2000 to 2009.   In 2007, she produced a gospel album in conjunction with well known jazz saxophone player and voting member of the Emmy awards, Richy Petrello.

Dr. Ku served as the production manager for the project and worked with numerous talented song writers, musicians, singers and recording studios. Dr. Ku is now living in Long Island, New York and teaches at St. John’s University as an adjunct associate professor.