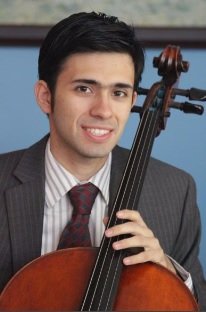 Francisco Alejandro S.  has studied cello for 14 years.  A graduate of Hofstra University, where he studied Music and Italian, Francisco has studied under the tutelage of Susan Lehr, Peter Tarsoly and currently under George Ginovker, former principal cellist of the Leningrad Philharmonic in Russia. He was a member of the Hofstra Symphony Orchestra, Hofstra String Orchestra and Hofstra Opera where he served as principal cellist. Additionally he has had the opportunity to perform in Tilles Center, Alice Tully Hall, Avery Fisher Hall and Carnegie Hall. He has been able to attend master classes with Carter Brey, principal cellist of the New York Philharmonic. In addition he was a member of Kammermusick, an orchestra created by Dale Stuckenbruck. He also performed with the New York Virtuosi and the American Symphony Orchestra. Francisco attended CW Post Music Festival for five years where he was winner of the Nassau Music Educators Association Scholarship in 2005, the Tilles Scholar Award in 2004 and the Concerto Competition in 2006. Most recently Francisco world premiered a Piano Trio that was dedicated by an up and coming composer Andres Soto. He is currently a member of the Hardwick trio, the North Shore Symphony Orchestra and he enjoys performing chamber music with his brother David S. He is the co-creator of the successful blog www.salazarfamilyciricle.blogspot.com.