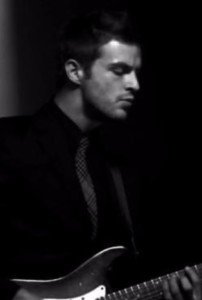 ric G. is a Guitarist/Bassist who also produces and teaches music. He has taught all styles of music for over 10 years in a learning environment that is educational, while at the same time making the lessons enjoyable for each individual student. His recording experience/credits include playing electric and acoustic guitar on Steph Pockets’ albums Can’t Give Up and Forever released on JVC in 2007 and 2011. He composed the song My Crew Deep (Forever) which went to #1 on the iTunes Japan best sellers chart. The “Can’t Give Up” single features Speech from Arrested Development. His live performance credits include playing guitar for the Steph Pockets Flowers Tour in Japan that included a stop at the Summer Sonic Festival 2005 where he was sharing the stage with Nine Inch Nails, Duran Duran, Oasis, Weezer, and The Black Crowes, as well as performing at other venues in Tokyo, Osaka, and Nagoya.  He has also performed with such musicians as Chuck Treece (Billy Joel, G Love) with soul singer Liv and alternative singer Leiana on many gigs in the U.S.