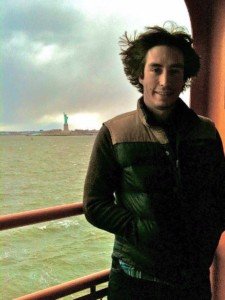 Dmitri Glickman (b. 1989), conductor and composer, grew up in Santa Monica, CA, and recently graduated from Bennington College.  There he studied with composers Allen Shawn, Nick Brooke and Kitty Brazelton.  Dmitri’s music  draws life from the intermingling of the rural and metropolitan, natural and mechanical, wild and cultivated soundscapes in which he has lived.  He brings a melodic and rhythmic sensibility to ambient music, as well as an ecstatic playfulness to more fast-paced music.

Dmitri plays piano, upright and electric bass, and has some training in voice.  As a composer and improviser, he enjoys bringing out people’s creative as well as interpretive gifts, and will ask his students to make up their own melodies.

Recent projects include music for film, experimental theater, live accompaniment for Yoga, utilizing Dmitri’s gifts as a vocal performer in an electronic-acoustic piece entitled Contact, and in March 2012 he conducted the premiere of his first orchestral venture Tides with the Sage City Symphony.

This past summer he returned to California Summer Music to continue studies with David Tcimpidis and participate in master classes with American composer John Corigliano.