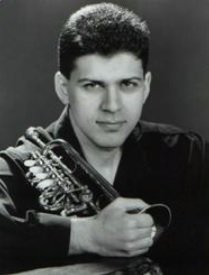 Since his graduation from The Juilliard School in May 2000, David G. has been leading an active performance schedule first as a member of Dallas Brass (2000-2002) and later as a bandleader, composer and a soloist of David G. International Ensemble, Manhattan Soloists and Wholly Brass in addition to solo engagements throughout the world.

In 1995, Mr.G. received an award from the Israeli Musicians Union for excellence in performance. He was a recipient of the America Israel Cultural Foundation Scholarship from 1990-2000. David G. was born in Moscow in 1975 where he attended the Gnesin’s Music School. In 1990 he immigrated to Israel where he spent the following three years in the Thelma Yellin High School for the Arts. He later served in the Army Orchestra from 1993 to 1996. David G. is an endorsing artist for New York Trumpet Company and plays Stage 1 Bb and C trumpets exclusively.