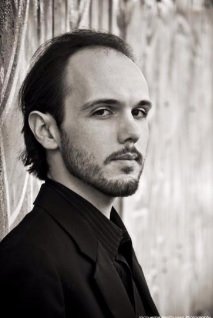 Pianist  David  Brooks  enjoys  a  multi-faceted  life  in  music.   As  a  performer,  he  plays  a repertoire  ranging  from  Alkan  to  Zwilich,  spanning  the  avant-garde and  neglected romantics, as well as the established greats.  Probing the lesser-known areas of the piano repertoire  is  as  much  a  priority  as  performing  the  enduring  warhorses –  in  recital  he  is equally  likely to play  a  new transcription  hot off  the press, as  he  is to play a Beethoven Sonata.

David was the first prize winner in the 2009 MTNA Washington State Steinway and Sons Young  Artists  Piano  Competition,  and  in  2010  was  a  top  prize  winner  in  the  Seattle Ladies Music Club Competition, which resulted in a statewide tour.  He has appeared as a soloist  with  the  Whatcom  Symphony,  University  of  Washington  Symphony,  and  the Western Washington University Symphony.  In 2009, he performed at Boston’s Gardener Museum and Brown Hall, and the Boston Globe called his playing “especially lush.”Committed to the performance of new music, David has taken part in the world premiers of more than 30 compositions, performing works by Rzewski, Boulez, Cage, Schoenberg, Liebermann,  Ornstein,  and  Feldman,  among  others.

As  a composer  and  transcriber, David  has  transcribed  a  wide  array  of  works  for solo  piano by  composers  ranging  from Bach to Penderecki.  David   holds   degrees   in   piano   and   viola   performance   from   Western   Washington University, where he studied piano with Jeffrey Gilliam, viola with Eric Kean, and violin with  Walter  Schwede.    While  at  WWU,  he  was  awarded  the  Presser  Foundation Scholarship, Western’s highest honor, and was the violist of the Ravenna String Quartet.   David still regularly performs chamber music as a violinist and violist. David teaches a studio of award-winning piano students at the University of Washington in Seattle.