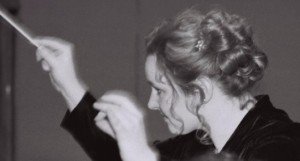 Amhara Buxton graduated from Pennsylvania State University’s School of Music with a Master’s in Conducting, under the tutelage of Maestro Gerardo Edelstein, where she performed with many groups, including PSU’s opera program and the PSU Sinfonietta.  In addition to her studies at Penn State, Amhara also began teaching full time, both classroom and private studio, which she carried over to NY after graduating.  Prior to studying at Penn State, Amhara was fortunate to be one of the few students taken on by Maestro Gerhardt Zimmerman, and apprenticed with him while he was director for the North Carolina Symphony.During her studies in Denver, Amhara was one of 4 students chosen to direct a piece during the Central City Opera’s Annual Christmas program, as well as being selected  to participate in a master class directed by German conductor,  Maestro Mark Mast.

While teaching in the NYC public schools, Amhara also created a very successful choral and musical theatre program, where she was privileged to introduce the genres and work with students who had never experienced live performance or theatre before. She feels that one of her greatest accomplishments has been her students that studied privately with her, as well as in class, who have since gone on to major in music at college, both performance and education.

As an educator, Amhara has always believed in treating the entire body as part of the instrument, be it vocal, piano, cello, or any other instrument.  She believes that each student is their own entity, and that what works for one will not necessarily work for another. In doing this, Amhara strives to help each student create a plan that focuses on their needs and wants, keeping them excited about learning fundamentals as well as their own interests.Above all, she wants her students to feel the passion she feels for music, and to have fun with all they do.