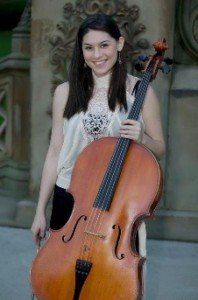 Alice L. Alice L. began her musical training in New York City. She received her Bachelor of Music degree from Manhattan School of Music and she is a recipient of the Artistic Excellence Award and Eva Heinitz Outstanding Cellist Award from Indiana University where she received her Master of Music as a scholarship student of virtuoso cellist Eric Kim. Ms. L. served as Assistant Principal Cellist of the Indiana University Symphony Orchestra under Maestro Cliff Colnot, one of the conductors of the Chicago Symphony Orchestra and conductor of the Chicago Civic Orchestra. In addition, while still a master’s student, she was invited to audition for the semi-final round of the Chicago Symphony Orchestra. Throughout her studies, Ms. L has been selected to study with the most competitive cello teachers in the country. Her cello teachers include Eric Kim, Julia Lichten, David Geber, Richard Aaron, and Susan Moses.

She has participated in Summer Festivals at Aspen, Tanglewood, Lincoln Center Out of Doors,  Nyack, Alba(Italy), Indiana University, C.W. Post, Aria International Music Festival, and Music On The Mountain at Mohonk. She has played in cello masterclasses for Janos Starker, Yo-Yo Ma, Mihai Tetel, Colin Carr, Fred Sherry, Timothy Eddy, and Jan Vogler. Alice has collaborated  with such artists as Junah Chung, Susannah Chapman, and Lawrence Dutton of the Emerson String Quartet.

In addition to performing, Alice L. has discovered a curiosity and passion for teaching. As a passionate educator, Alice studied long term Cello Pedagogy with Pamela Devenport at New York’s School for Strings and Violin/Viola Pedagogy with Mimi Zweig at Indiana University. She was a faculty member of Indiana University Pre-College and currently teaches at Music Institute of Long Island and C.W. Post Long Island University.