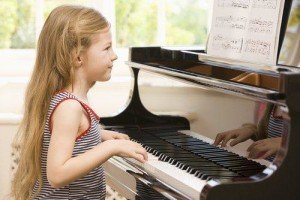 The story of the piano began in Italy in 1709, in the shop of a harpsichord maker named Bartolomeo di Francesco Cristofori. Before the development of the piano came many other string and keyboard instruments.

The origin of vibrating sound goes back to prehistoric times. In the ancient world, strings were attached and stretched over bows and boxes to amplify the sound. They were fastened by ties, pegs and pins; and were struck to produce sounds. Enroll in the best music lessons today at Kathryn Brickell Music : www.music-instruction.com

Eventually, after sometime, a family of stringed instruments with a keyboard evolved in Europe in about the 14th century. The earliest of them was a dulcimer. The dulcimer paved the way for the development of the clavichord in the 14th century, followed by the spinet, virginal, clavecin, gravicembalo, and the harpsichord in the 15th century.

The harpsichord however had one drawback, it’s softness and loudness could not be varied while playing.

**Therefore the artists played one or more instruments for the same piece of music.

The artistic desire for more controlled volume and expression led to the invention of the piano, on which the musician could change the loudness and tone with the use of only two fingers.

The harpsichord was a key factor leading to the invention of the piano. Its ability to project sound more loudly than the previous instruments and the ease of changing the sound frequency by a simple touch inspired many musicians to perform keyboard works.

The First type of piano was the gravicembalo col piano e forte (roughly soft and loud keyboard instrument”) which was exhibited in Florence in 1709. Eventually the name of Cristofori’s new instrument was shortened to fortepiano or pianoforte, and finally just piano. His earliest surviving instrument dates back to 1720 and is on display at the Metropolitan Museum of Art in New York City.

Despite many improvements during the past 300 years, it is truly astonishing to observe how similar Cristofori’s instrument is to the modern piano of today.

The history of the creation of the piano proves the fact that Need is the mother of invention Call us today to schedule an appointment or view some of the instruments we offer.